with
Jenny Doan
Quilt Size: 75" x 75"
Jenny demonstrates how to make a beautiful Brown Goose quilt using 10 inch squares of precut fabric (layer cakes). For this project, she chose Heart to Heart Batiks Stacks by Kathy Engle for Island Batik. The Brown Goose is a favorite antique block that dates back to the 1800s. It is also known as the Double Z quilt, the Devil's Claws quilt, and the Gray Goose quilt. This quick and easy old fashioned block comes together easy-as-pie with simple half square triangles.
Print Supplies List
Supplies list 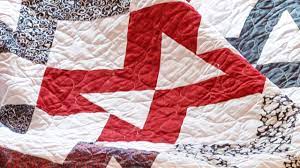