with
Jenny Doan
Quilt Size: 83" x 95"
Time: 10:11
Jenny demonstrates how to make a beautiful zigzag jelly roll quilt using 2.5 inch strips of precut fabric. For this project, Jenny chose the Saguaro collection by Christina Cameli for Maywood Studio. This quilt is based on on old Missouri Star favorite, Diamond Terrace. The layout creates the look of a bargello or chevron quilt, and it's just a beauty!
Print Supplies List
Supplies list 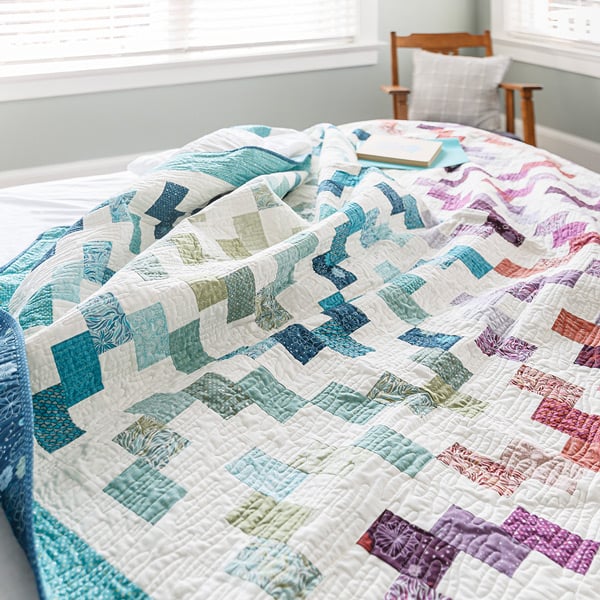 So this quilt is based on a former tutorial I did called Diamond Terrace. And this is the block right here. We put it together and it formed this cool diamond, same block, different layout. So what we’re doing now is we’re going to turn this one and we’re going to have one that goes down and one that goes up like this. And what it does is it gives it this cool look like a bargello that goes through or a chevron or something where it’s just kind of stacked on top of each other. Really cool layout so let me show you how to make this.

Alright, so now what we’re going to do is again all of our print pieces are four inches so I’m just going to kind of grab some of these that are mixed up over here. And I’m going to make this pretty purple block right here so I’m going to grab four of these like this, different ones, all different. You can see this is such a pretty line of fabric. Alright so there’s our four or we need five actually. Alright, there we go, five pieces of color right here. And then let’s look at this block again. We have three pieces. They’re the exact same four inches sewn to a 4 ½. And then our same four inches and these are all sewn to a 2 ½ on either side so let’s go ahead and do some. Four inches on these. So we’re going to take three of these and we’re going to grab our four inch pieces and we’re going to come to the sewing machine so remember the background is 4 ½  and the print is four. And so we’re just going to sew down and I’m just going to add another one. We’re going to chain piece through these and peel these apart. Here we go. And then one more here and then our other two pieces. We are going to put again, these are four inches. We’re going to put a 2 ½ on both sides. So I’m going to go ahead and put this one on here like this. And I’m just going to leave them just hooked together for now and then I’ll clip them apart in a minute. Now I’m going to pull these out and take these off of here and sew a 2 ½  on the other side so both sides of this four inch piece, they get two 2 ½ sewn on it. Oh and take a look at this. If you can see this, see how these are the little selvedge dots right here and I’ve missed those but I’m going to be able to catch those in the quarter inch seams so I’m not worried about that at all. And then one more on this one. Alright now let’s clip these apart. And we will press them open. I’ll get all my little pieces here. There we go.

Alright so let’s go ahead and press these open. I’m keeping, I’m pressing to the dark side so my darker color is on the top. When you’re working with a light background like this it’s a great idea to always remember to press to the dark side because if I pressed to the light, that seam would show through. And so, well, you know, while it doesn’t always matter just watch it, you know, just have it stick that in there so you’re looking at it, thinking about it. I remember one time I was quilting a quilt and it had a, it had some of the seams that showed the color showed through on the other side and I was just like Ah, you know, all right. So let me show you how easy this is to put together.

So that was really fast. We sewed that really quickly. We cut really quickly. We’re actually making the whole block so we’re going to  put our two pieces right here and then when you go to put these together this, it’s just a matter of flipping these up and down. So the first one we’re going to start down like this. Then we’re going to put a two piece right here. Then this one is going to be up. Then we’ll put our two piece here and this one is going to be down. And then what you want to look at on this is you want to look at your color placement. You know, do you have it all right the way you want to do it, you know, does it look good. And then we’re just going to sew these rows together. And so let me go ahead and stitch these.

And because these pieces are all the same size there’s literally nothing to line up because they’re staggering. We’ve staggered them on the block. So we’re going to sew this one. I’m going to open it up and I’ll put the next one here. And then one with the little, the two on either end. And then one more. And the way to remember this is if this one is up then the last one is up too. So it’s however you lay them out, I mean the block, you can flip either way. It won’t matter so you’re not going to get those wrong as long as you stagger them, you know, next to each other. Alright so let’s press this. Ok, so now you have this cool little block.

Now the whole thing is in the setting so let me move these out of the way a little bit so I can show you how we set this. Super easy, we’re going to put this one here and then this one we’re going to turn it once and put it like that. And then this one up and so it’s just up, over, up, over, up, over and what it does, at the end of the day, is it makes, it makes these cool things. It catches on, on the next row and does this whole chevron bargello kind of thing that’s really cool. Really cool. I love it. Alright so we’ve got one, two, three, four, five, six, seven, by one, two, three, four, five, six, seven, eight, nine, ten, 11. Seven by 11 so it makes a great big size quilt. It’s 83 by 95. And then I put, once I get all your blocks on you’re going to do a 2 ½ inch border out here, first border. Second border is a nice big five inch border. Let’s take a look at the back. Isn’t this gorgeous fabric. Now this quilt pattern is really fun on here too because it’s called Water and since it’s like a sunset over the lake, you know, Water worked for us. So we hope you enjoyed this tutorial on the Lakeview Terrace from the Missouri Star Quilt Company.

We hope you enjoyed watching this video. If you’re not already part of the Missouri Star quilt family you can hit the subscribe button below so you won’t miss a thing. And if you click that bell it will notify you every time a new tutorial comes out. See you next Friday.