with
Jenny Doan
Quilt Size: 40" x 40"
Jenny Doan shows us how to use striped yardage to create the illusion of a square in a square block in The Quartered Stripes Quilt. We used Kaffe Fassett Stripes for Westminster Fabrics.
Print Supplies List
Supplies list 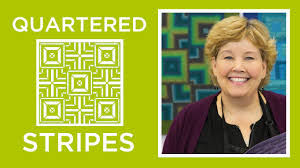