with
Jenny Doan
Quilt Size: 73" x 73"
Jenny Doan demonstrates how to make a traditional signature quilt using yardage and 2.5 inch strips of precut fabric. For this project, Jenny used a Flowerhouse Sunshine jelly roll by Debbie Beaves for Robert Kaufman. Signature quilts, also known as friendship quilts, date back to the 1830s. The signatures can be added with embroidery or ink. Jenny chose to use a permanent marker with a fine point.
Print Supplies List
Supplies list 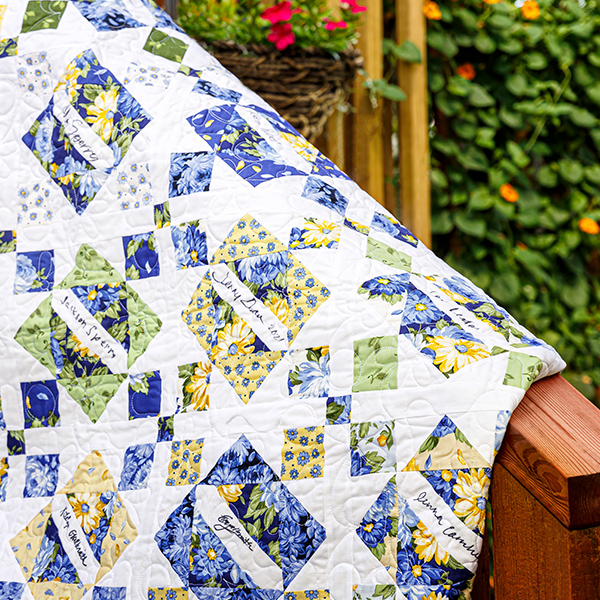 watch now
How To Self-Bind A Quilt
with Jenny Doan

Hi everybody, it’s Jenny from the Missouri Star Quilt Company. And gosh I’m excited about today’s project. Let’s take a look at it. This is a Signature quilt and this is the block. And you can see the signatures are right here. Here’s my darling husband, Ron and here’s mine. This is actually a family signature quilt and so we have all of the family by groups. So here’s Darrell’s and Natalie’s and Sarah’s and Hillary’s. And they’re all on in little groups in the quilt. And it’s just so fun to have these signatures. Also, just in case, you know, somebody has a baby, I have some blank ones so that they can put them on there. And I just think this is really fun. So if you have a guild and you want to do a signature quilt with your guild or quilt group or your friends and you want everybody to make a block, this is a great idea to do it. So let me show you how to make this block. So to make this quilt you’re going to need one roll of 2 ½ inch strips. And we have used Flower House Sunshine by Debbie Bevis for Robert Kaufman. You’re going to need 1 ¼ yards for an accent fabric. You’re going to need 3 ½ yards of background fabric and that will include your sashing and your inner border. You’re going to need 1 ¼ yards for your outer border. For your backing you’re going to need 4 ½ yards of 45 fabric or two yards of a 108 wide print. Also helpful on making this quilt will be a permanent marker and a squaring tool.

Alright so this is the block we’re talking about right here and we got most of it out of these 2 ½ inch strips. Now you’ll notice the center block on all of these is the same fabric. So I took that fabric out of the border fabric. I cut a 4 ½ inch strip and cut it into 4 ½ inch squares like this. And then we cut them on the diagonal one time. Now in order to have a signature block you’ve got to have signatures. So what we did was we took these inch and a half strips and I’m going to cut off the selvedge and the fold right here. And we cut seven inch strips, so just like this. And we sent them out to all of the families with a marking pen, a permanent sharpie or you could use this microtec or something like that. Now one of the things that, we sent some instructions, you know, and one of the things was to keep about an inch in on either side. And then also we told them that if you want to sign something, it’s easier if you sign on something soft. And so we’re just going to go on here and you don’t press down too hard and you just sign your name and it will go right in the middle of that signature block. So what I did once I got the signatures back, and honestly it was so fun to get them back because some of the little kids, they put their ages which I think is really fun. One of my granddaughters wrote I love you, well I had to include that one, you know, and so we gave them extras in case they made a mistake. Like here is Ezra who is ten. And I love that they put an age on there. And I think for most of the kids, the little kids anyway, I’ll probably go through and just put that age in there so I remember exactly when I made it. On mine I think I put 2021 so I know the year that it was done and that’s pretty fun.

So the outside of the block right here, you can see, this is a finished block waiting for someone to sign it. But we’ve got four flying geese here. And because our center is 4 ½ these blocks are going to be 4 ½. And then we have four corner squares and those are 2 ½. So what you can do is you can take your strip. And I’m just going to take two different strips here because I like them scrappy and I like to, you know, cut a bunch at the same time. And what I’m going to do is I’m actually going to trim off my selvedge right here. And then I’m going to trim, I’m going to cut two of these 2 ½ inch blocks because you need four for each block like this. And then we’re going to cut two 4 ½. And when I cut them, when I cut 4 ½ with my 2 ½ inch ruler I like to lay it the long way like this so that my line, my 4 ½ inch line lines right up and then I’m cutting two of those as well. So then you have enough of these pieces to make your block. We need four of these, one, two, three, four. And we’ve actually cut enough for two blocks. So we have, these will go on the next block and we’ll set those over here. And then I’m going to put the greens on the outside of this block right here. And then on this one over here it will be the blues in the corner. And so that will make it really nice and good.

So here’s our little block right here. Now let’s go to the quilt and let’s look at how we put this together. So to be honest I finished all the signature blocks and I put them all together. And because there isn’t a lot of variation in fabric and colors, it just kind of all mushed. You lost the block and so I had to use sashing to frame up the blocks to set those blocks apart because I wanted each block to, you know, be its star of its own space. And so what we did was we added sashing. I knew this was going to be a pretty big quilt because of all the, you know, all the blocks that you can make in it and so I used an inch and a half sashing. And these blocks should finish right around 8 ½. And so we’re going to look and see how we did here. We have an 8 ½ cut and we’re just about perfect. Out of the border fabric, I took a 1 ½ inch strip and I cut all these cornerstones. For me, if I were to try to line this up without the cornerstones I don’t know what is wrong. I can pin, I can look, I can measure. They just don’t line up for me. I mean it’s just really a difficult thing for me. I don’t know what the deal is. I used the horseshoe pins, I’ve used the things. It just really doesn’t work. But if I have a cornerstone then I have something to line it up with. So these are little inch and a half cornerstones.

So what we’re going to do is we’re going to sew a sashing strip to both sides like this. So right now I’m sewing a sashing strip on both sides because this one is going to be at the beginning of the row. You’re going to want to, you know, lay out your blocks ahead of time and just put a sashing strip right in between every block. So this is the way this is going to look. Let me show you here. I’ll iron these back. Now one of the things you want to watch is how you have your signature in here matters. And so you know, you don’t want to have your signatures, you know, one going this way, you know, I wanted all of mine to go this way. And so if that matters to you  watch that. And so these would all be going this way. So this one has a beginning sashing and then it has this sashing here. And then you’re going to sew this block to it, add a sashing, sew the next block, add a sashing, sew the next block. Then this row right here is the same size as the block, 8 ½ but you’re going to have a sashing and a tiny cornerstone, sashing, tiny cornerstone. This is its own row right here. So then out on the outside, what we did was we just added a little tiny 1 ½ inner border. And our outer border was a nice big six inch border. And we, this is so pretty right here. So on the back here you can see this cute stitching pattern. It’s called Hearts and Flowers and it’s just darling. It makes a nice little edge to edge pattern. Now remember however many signatures you have, this quilt can be any size that you want it to be.

So out of a jelly roll you can get 51 blocks. I used 49 for this quilt right here so it’s seven by seven. And I have some extra spaces in case we have more people. But the bottom line is this is my family’s signatures from the year 2021. And I just think it’s really special and I’m super glad that we did it. So if you happen to need a signature quilt in your life we hope that this gives you an idea. And we hope you enjoyed this tutorial on the Signature quilt from the Missouri Star Quilt Company.

We hope you enjoyed watching this video. If you’re not already part of the Missouri Star quilt family you can hit the subscribe button below so you won’t miss a thing. And if you click that bell it will notify you every time a new tutorial comes out. See you next Friday.