with
Jenny Doan
Quilt Size: 73" x 85"
Jenny demonstrates how to make a beautiful Solar Flare quilt using two different fabric precuts: 5 inch squares (charms) and 2.5 inch strips (jelly roll). For this project, Jenny chose Floragraphix V by Jason Yenter for In the Beginning Fabrics. She also used 2 yards of Heat N Bond Lite and the Missouri Star Circle Magic Small 5" Circle Template. This quilt comes together quickly with strip sets and easy-as-pie applique. It's based on the classic "coin quilt" pattern," but we've applique pretty circles throughout the quilt for a look that is our of this world!
Print Supplies List
Supplies list 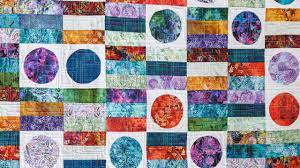