with
Jenny Doan
Quilt Size: 48" x 64"
Jenny demonstrates how to put together yet another beautiful star quilt using 10 inch squares of precut fabric. Her fabric is Designer Essential Solids Mythical 10" Squares by Tula Pink for FreeSpirit Fabrics. (Note: this quilt can also be made with 5 inch charm squares.) This pretty layer cake pattern was designed by Material Girlfriends, and it's an absolute treasure! With just a flick of the rotary cutter, ordinary four patches are transformed into magnificent star blocks—right before your eyes!
Supplies list 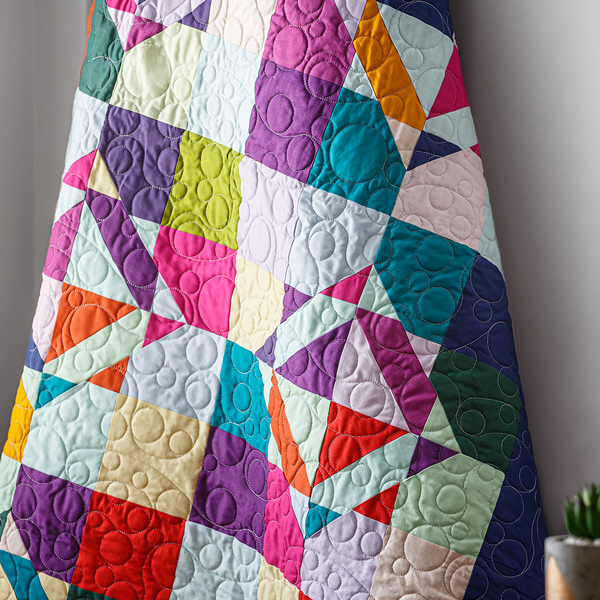 Hi everybody, it’s Jenny from the Missouri Star Quilt Company. And every once in a while somebody comes along with a fun new pattern that just really catches my eye. And this is one of those. This pattern is called Wallah and it’s by Material Girlfriends. And it’s just clever. Wait until I show you how they do it because it’s just fun. So to make this quilt you’re going to need 48 ten inch squares. And those are actually going to be cut into five inch squares. So you can use five charm packs or you can use one pack, as we did, of this Free Spirit, Tula Pink’s new colors. Ten inch squares and a half a yard of a couple of extra so you can get 48 ten inch squares out of that. . You’re going to need about a yard and a quarter for your border. And this is a nice little five inch border out here. And your backing is four yards of horizontal seams and we’ve used that pink. Isn’t that gorgeous? So the quilting on this is called Circle Meander. And it’s just perfect for this I think. Alright so let me show you how to make this.

So the way we’re going to put it together is we’re going to have a four patch that has one light and then three darks. And then we’ll make another block that has three lights and one dark. So this is our three darks and one light. And we’re going to sew those together like a four patch. Now I have one here that’s already done. I figured four patch sewing is pretty easy. So just like this. So this is three darks and one light and it’s just sewn a quarter of an inch. You’re just going to lay your two squares together like this and sew a quarter of an inch, sew the next two and then put it all together in a block just like this. And then you’re going to have one that is three lights and one dark.

So let’s go to the sewing machine. We’re going to flip these around and line them up. Your points should go right to the edge of this. Now this is going to come out a little wonky but don’t you worry we’re going to fix this all up and it’s going to be just amazing. Alright so now I’m just going to finger press this out and I’m going to add this piece here should match this piece here, the little piece that you cut off. And so this is going to come out here to the end. And that will just lay right in there on that cut. Alright. Now we’ll do the next one. So this is our dark one and we’re going to put this piece in here in the middle and lay it back. And again, your little points will just nest into those corners. They should match exactly into those little corners and it should just be just right. And now this middle one we’re going to go right here and lay this in here. Let me show you how this lays in here. I’m going to press this back so you can get a good look at this. So this right here, this is just going to lay right in there, just fit exactly in that place that we cut it out of. So you go ahead and put that on there and sew it a quarter of an inch. And then we’re going to press this open and we’re going to press this one as well.

Alright now we’ve got a block that looks just a little wonky, just a little bit. And we’re going to take our 8 ½ inch ruler and we’re going to lay it here. And we’re going to make sure that our point is on the whole side. So whenever you have half an inch you need to be really aware of that because if it gets on the wrong side, you know, your block isn’t going to be quite right. So I like to line mine up where no half inch is and I’m going to line it up right here in the corner of this square right here. And I’m going to put that on there. And that means that at this junction right here this should match up, the four inch mark should be like right there. Where all those four blocks come together, that should match up.So then what I’m going to do, you can see I’m going to have a little bit of waste but I’m going to trim this up like this and like this. And then trim this side like this and then down here. Now this is a great time to use a rotating mat. And so now you’ve squared up your block. So now it’s square. It squares up to 8 ½. So let’s do that again. So you can see it. Again check for your half inch lines and then lay this in the corner right here. And literally where these little lines come together where it says four, that should nest right in the middle of your four patch, right where that comes together. So then we’re just going to trim and trim. And if you need to you can turn it. Be sure and turn your ruler. These should be right over here. And then we’re going to trim and trim. Alright.

So now we have these two different blocks. And what we’re going to do is we’re going to sew these together like this. We’re making a big four patch. This is what we’re making right here. So we have a light block and a dark block and a light block on the bottom and a dark block. So we put four different of our color values together. And this one is a light and a dark. So we’ll sew them together in halves. And then we’ll sew them together in halves again. So these two, it doesn’t matter which two go together. You want to just mix them all up and have fun with it. There’s a lot of ways to lay this out so this is really fun. These kind of patterns just really intrigue me. Alright so now we’re just going to sew a quarter of an inch right down the side. Alright now let’s take a look. Iron this open. You can see all the seams are a little bit off, just not quite matching up. That doesn’t bother me in the least. I love the look of this. I just think it’s fun because it’s just so playful. And so then I’m going to lay this together. And I’m actually going to try, right here these two peaks, where these peaks come together, those should match pretty close. Your center block should match and then these two peaks out here should be pretty close as well. But if they don’t line up exactly I wouldn’t worry about it because it doesn’t really matter. You know, this is one of those where you give the illusion of what you’re getting which I really like those. There’s a lot of free form to that. So let’s go along here. I am going to try to make sure my two middles line up. Alright so now we’re going to line up our middles here. Alright let’s press this out. And then we’re just going to make sure these seams are going the way we want them to which is one direction, whatever they like. I have a theory about ironing. Nobody ever looks inside your quilt to see which way you ironed. So don’t stress over the ironing too much.

Alright so here’s our block. And this is fun. So this goes together in this quilt and we did it lights and darks. So it’s going to go like this. This is how this fits in the quilt. And so then the next one will be the same. So this is the dark block, your next square will line up with lights, to the dark, lights to the dark. And you’re just going to sew them straight together. These are sewn right together. But I was really intrigued by this block and this method of just cutting off this one corner. And I wanted to see what it would look like if I just did it in two colors. So I have these solids right here. And I just did a blue and white because I had that piece of blue right handy. And so I wanted to show you how it looks like if we do all the blues, I mean all the blue in the center so like this. And hopefully I have four of these. I  might only have, let’s see here. Nope I have, oh yes, here it is. Whew! Ok. So here’s my other one right here. So this is how it looks if you just do a solid and a white. And so that comes together really fun. What happens if we do the opposite and we put two lights and two darks together like this. Look how cool that is. And just checkerboards and does something different. So in the pattern there are actual, she has, they just have loads of ideas for laying this out. You know, and so they’ve got, you know, all different kinds of things. They use half blocks for one. They use quarter blocks for one. I mean there’s just lots of ideas. And even a place to draw out your own block.

So I love these what if factors and what happens if when you’re playing with it. I guess I should show you what the dark one looks like all dark because I have enough for those. Here’s that one. So you can see, even just changing these two colors, it’s completely different. So it’s just way fun to play with these. There’s all different options. Now when you look at the quilt, you can see on ours that we have one, two, three, of these big four patches across, that are just sewn right together. And one, two, three, four down. So 12 of these big blocks together. Again a little five inch border. It makes a quilt that is 56 by 73 so it’s a great size. A lot of fun to play with. I just fell in love with this Wallah! pattern. And we hope you enjoyed this tutorial from the Missouri Star Quilt Company.