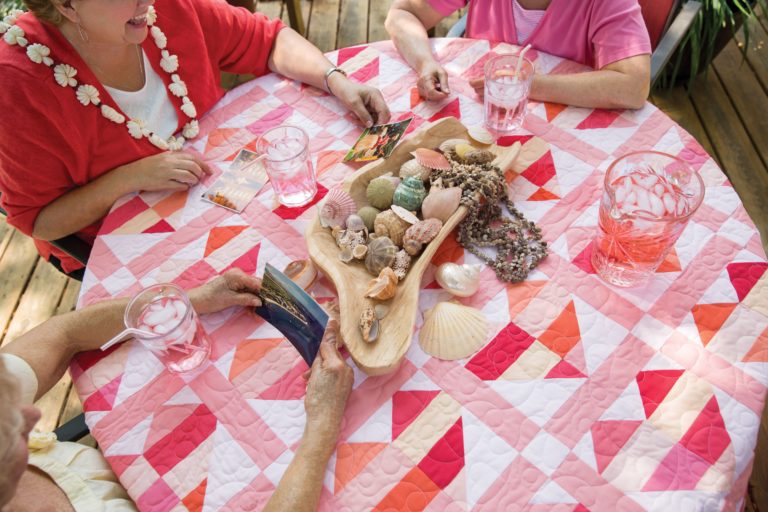 So now one more thing, we have these awesome little pieces that we’ve cut off out here. Let me show you how we did this project right over here by me. So I’m going to press these two open. You know we never want to waste if we can, if we can help it. So we try to save all of our little pieces. And for our little pieces out here, once you realize, once you, once you cut these off, I mean these are mine cut off. Obviously mine are a little different size so you’re going to have to square them up. But this is a half square triangle. So I want you to think about half square triangles. Anything that we do with half square triangles you can do with these blocks. So you could make a pinwheel. Look at this. Oops, one more turn, one more turn, here we go. You could make a pinwheel. You could make a, you could make a flying geese block. You could make a chevron block. Anything we can do with a half square triangle you can now do with these. We decided to make these flying geese blocks. So we have a row going this way and a row going this way and a row going this way. And it just makes a cute little runner. A little extra something and something to do with your extra little corner blocks so there’s no waste at all. So we hope that you enjoyed this tutorial on our heart quilt. We’re calling it Tender Hearts, from the MSQC.