with
Jenny Doan
Quilt Size: 64" x 82"
Time: 11 Minutes
Jenny demonstrates a quick and easy way to make The Friendship Pinwheel Quilt using 10 inch squares of precut fabric (layer cakes) from the Off Shore line of fabric by Deena Rutter for Riley Blake. Learn how to chain piece to save time and use a press line to make snowballed corners.
Supplies list 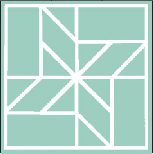